The inability to claim tax credits has slowed solar on educational buildings. State lawmakers agreed to include $21 million in an omnibus energy bill to help K-12 schools and community colleges add panels to their rooftops.

A new, first-of-its-kind state fund could help triple the number of solar installations on Minnesota K-12 schools and community colleges.

Minnesota ranked 11th in the country last year for solar capacity on school buildings, with 157 installations identified in a national industry report. That leaves hundreds of rooftops with the potential to host money-saving solar projects.

School districts are at a disadvantage when it comes to solar financing since they do not pay taxes and thus can’t take advantage of state and federal tax credits. State lawmakers voted this month to provide an alternative source of funding designed to spur as many as 350 new projects on educational buildings.

The omnibus commerce and energy policy and finance bill includes $16 million for solar projects on K-12 schools and nearly $5 million for community colleges.

The Minnesota Solar Energy Industries Association predicts the funding will cover solar on at least 70 schools in Xcel Energy’s footprint in and around the Twin Cities and another roughly 280 in Greater Minnesota. The difference is due to size restrictions based on state law. Schools served by Xcel can apply for projects up to 1 megawatt while outstate schools can only install 40-kilowatt projects due to limitations in the state’s net metering law.

Rep. Jamie Long, DFL-Minneapolis, helped craft the legislation. “I think [the law] has multiple benefits,” he said. “It’s going to certainly create jobs in the solar industry and help tackle climate change by deploying more solar energy. But I am most excited about the sciences schools, because I think that creates real opportunities for learning and teaching.”

The bill seeks to build more solar to reduce energy costs, which often represent schools’ second-highest budget expenditure. The presence of solar should ignite student interest in clean energy and global warming, Long said. Though Minnesota has seen growth in solar on schools, the pace is not fast enough in a time when “we know that we have a limited amount of time to reduce our greenhouse gas emissions,” he said.

David Shaffer, executive director of the Minnesota Solar Energy Industries Association, said the state has never had a funding source specifically for schools. “The funding will allow school districts that have been thinking about solar to jump in now,” he said. “They may get their roofs repaired, if they need to, and then get funds to install solar and begin reducing energy bills.”

Xcel Energy’s Renewable Development Account will manage $8 million for grants for K-12 schools and half the expenditure for community colleges. The Department of Commerce will manage the same amounts using money from the general fund. In Xcel Energy’s footprint, 40% of the money will be directed at schools where at least 50% of students receive free or reduced lunches.

The new law should help school districts with a large percentage of low-income students, such as St. Paul, invest in solar and see lowered utility bills, said Eric Pasi, chief development officer for solar developer Impact Power Solutions. (Pasi is also on the board of directors of Fresh Energy, which publishes the Energy News Network.)

Pasi said most solar school projects have been built in Xcel Energy’s territory, where districts have attracted third-party developers. He hopes legislators will revisit the state’s net metering law because rural schools could receive more benefits by installing larger solar arrays. When his company does 40-kilowatt projects, they cover 5% to 10% of a school’s roof even though “we could go much higher [in kilowatts], have a greater impact and better use the property’s roof,” Pasi said.

Despite the limitation on the size of school installations in Greater Minnesota, the law permits Xcel’s Solar Rewards program to offer incentives for school projects larger than 40 kW, he said. In the past, suburban school districts have collaborated with third-party developers on projects. The developers build and own projects for several years, taking advantage of the tax credits while selling power to the districts at a discounted price.

For community colleges, the infusion of money for solar will have the same impact, with schools using the panels as teaching tools, Delurey said. Students may already have an interest in solar, and panels above their classrooms should “boost and amplify that interest,” Delurey said.

Finally, targeting schools with low-income students “is going to support the schools that need it the most and we hope will actually be a big step towards equitable outcomes,” Delurey said. “You can’t really do that if you just let the market turn its own course. By having that specific, targeted grant-giving criteria, I think we’ll see additional layers of social benefit as you layer on equity.”

The same legislation also provides $10 million for Xcel Energy’s Solar Rewards incentive program, which had been set to expire in 2022 but will now have money for an additional two years. And it includes money for a training center in North Minneapolis and to expand Heliene Inc.’s photovoltaic solar manufacturing plant in northern Minnesota. 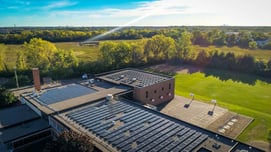 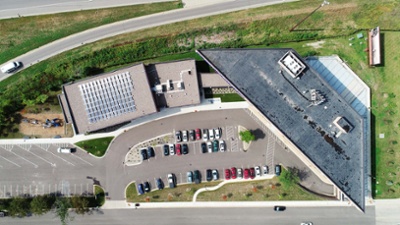 Solar Alleviates Pandemic Pain for School Districts across the U.S.